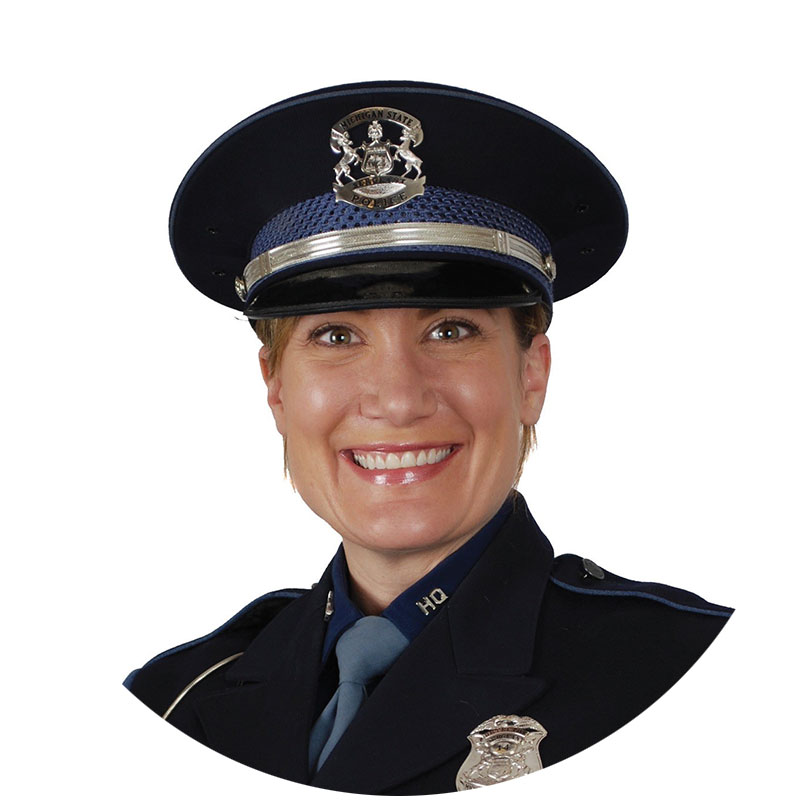 Sarah Krebs has been the Michigan AMBER Alert Coordinator since 2014. At that time, she also served as the Missing Persons Clearinghouse Manager and the Unidentified Remains Manager, which have since been reorganized into three different positions. Krebs began as a Michigan State Police Trooper in 2000 and took on additional duties as a forensic artist in 2002. She later became an investigator before transferring to the Missing Persons Unit. Krebs still offers investigative training and assists with cold cases.

What is the best part of your job?

What is the hardest part of your job?

It is very difficult when you tell law enforcement and a family that their child will not get an AMBER Alert. There is a lot of pressure because they know this is such a powerful tool, but the situation doesn’t always fit our current criteria. The AMBER Alert notifies so many people and we have to protect it so we are not overusing it.

We do use our Endangered Missing Advisory for cases that don’t meet the AMBER Alert criteria. The advisories have been very helpful.

Michigan recently changed its criteria for the AMBER Alert - what impact has that made on the program?

When Michigan created our policy in 2001 we were the fourth state to have an AMBER Alert. Our criteria were extremely broad and included all endangered children. So many cases fit that we would put out 40 or more AMBER Alerts each year. However, no one complained about the high numbers because a lot of the alerts were regional. The public didn’t notice the high number of alerts, but they thought any child who was missing and endangered was eligible for an AMBER Alert.

The Wireless Emergency Alert (WEA) changed the AMBER Alert and made it a more powerful tool because you are waking up people with alerts on their cell phones. We wanted to change the criteria to meet the national standards. For instance, the alert would go out for child who is missing with a sex offender, even if the parent was the sex offender.

We couldn’t send out WEAs 40 times a year. So in 2017, we changed the criteria to be for child abductions only. We went from 15

AMBER Alerts in 2016 down to three in 2017. It was really eye-opening. Only legitimate abductions have AMBER Alerts issued for them now. There is still some public confusion because we previously issued alerts for endangered children. We just had a missing autistic child and people on social media were asking ‘Where’s the AMBER Alert?’ The community is starting to answer those questions and letting others know that the criteria doesn’t fit.

We never had a secondary alert and that’s why the AMBER Alert initially included everything - because it was our only option. We added the Endangered Missing Advisory; and that alerting tool still depends on public involvement and help. The advisory can be used for people with Alzheimer’s and dementia, children with autism or children who are endangered for another reason not related to an abduction. The new program is really working flawlessly. We still have some pushback, but we can now offer another alerting option even when we do not issue an AMBER Alert. However, it doesn’t reach everyone’s cell phones.

Social media can also be used to help get the word out, and that approach is really working well. Social media is a great partner for the AMBER Alert and Endangered Missing Advisory. We recover more children from tips and leads generated by Facebook than anything. Social media is the ‘milk carton’ of the 21st century and utilizes the internet to reach large numbers of people rapidly. I do wish I had someone who could work full-time with a focus solely on maximizing and managing the use of social media with endangered missing and abducted person cases.

What other initiatives have you taken to help find missing and abducted children?

We created a movement with an event called Missing in Michigan Day that started in 2011. Based upon its growth, we started a non-profit to support it and handle all of the donations. It’s started a revolution across the country. We now have similar events across the country, such as ‘Missing in Arizona’ or ‘Missing in California.’ The public comes together to remember the people who are missing. We also continue to work year-round collecting DNA and making reports. It’s a proactive law enforcement event where people can meet each other to talk about their missing loved ones. We have gathered more than 100 missing unidentified cases since the event began in 2011.

We also just passed a law that makes Michigan the first state in the country to require all law enforcement to immediately enter missing person information into the National Missing and Unidentified Persons System (NAMUS).

What motivates you to find missing and abducted children?

I think my work as a forensic artist and working with unidentified remains was the start. These cases are terrible. I’ve seen the agony families have gone through when a loved one is missing. I am a parent of a six-year-old girl, a one-year-old girl and a baby boy on the way. No one is more vulnerable than a missing child.

What advice would you give to others who work with the AMBER Alert program?

I think coordination between the states is essential. At the National

AMBER Alert Symposium, we had representatives from all 50 states. It was so important to be able to connect faces with names; and to meet and network with other AMBER Alert Coordinators, Missing Person Clearinghouse Mangers and CART program members from each state, especially when you have cross-state abductions. It’s important to know people and to trust them.

For instance, we had an AMBER Alert and an officer in Colorado ran a plate and saw the alert in Michigan. The AMBER Alert program is powerful and I’m proud to be a part of it.

What was your most memorable AMBER Alert?

Probably the multi-state alerts stand out the most for me because of the coordination between all of the states. The first AMBER Alert I did was for children who were abducted in Indiana and found in Detroit. An FBI agent told me the Indiana children were in Detroit. I called the Indiana AMBER Alert coordinator and we were able to issue an AMBER Alert swiftly and effectively; this was helped by us knowing one another and having that personal relationship. The alert ended with a car chase and both children were recovered safely. So, my first AMBER Alert involved multiple states, two children and a gunman taking the children during the middle of the night and asking for a ransom. It literally sounds like something that could have been made into a movie. But we work hard for the best possible outcome – safe recovery of the children.