As shared from WhiteHouse.gov’s Law and Justice Proclamation on May 5, 2020: 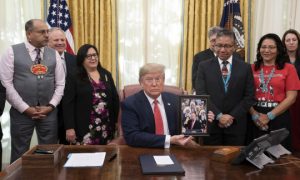 The American Indian and Alaska Native people have endured generations of injustice.  They experience domestic violence, homicide, sexual assault, and abuse far more frequently than other groups.  These horrific acts, committed predominantly against women and girls, are egregious and unconscionable.  During Missing and Murdered American Indians and Alaska Natives Awareness Day, we reaffirm our commitment to ending the disturbing violence against these Americans and to honoring those whose lives have been shattered and lost.

Resiliency, collaboration, and resourcefulness are all necessary to eradicate the heartbreaking incidents of missing persons and fatal violence experienced by American Indian and Alaska Native communities across our country.  My Administration stands squarely behind the tribal governments that are leading the efforts to address this pattern of violence so that their people can live in peace and thrive.  The Yakama Nation in southern Washington is using the State’s major violent crime database to track the disappearance of tribal members.  On the Navajo Reservation, the Missing and Murdered Diné Relatives Work Group is working to end sex trafficking, child abductions, and other challenges within the largest tribal jurisdiction in the Nation.  In Montana, the Confederated Salish and Kootenai Tribes are engaged with State officials to prioritize cases of missing and murdered tribal citizens.  Beyond these and other efforts, tribal communities are leveraging rich cultural traditions of healing ceremonies and spiritual practices to offer refuge, compassion, and comfort to individuals and families in crisis.

Under my Administration, tribal governments are not alone in fighting the epidemic of violence against American Indian and Alaska Native people.  In October of 2019, the Department of Justice (DOJ) awarded more than $270 million in grants to improve public safety, serve victims of crime, combat violence against women, and support youth programs in American Indian and Alaska Native communities.  The DOJ’s Missing and Murdered Indigenous Persons Initiative is placing coordinators in 11 United States Attorneys’ offices to develop comprehensive law enforcement responses to missing persons cases.  These responses also include the use of the Federal Bureau of Investigation’s advanced capabilities, enhanced data collection, and analysis to support local efforts when required.

The Department of the Interior (DOI) is also taking action to address the critical concerns of American Indian and Alaska Native communities.  DOI’s Bureau of Indian Affairs has launched a series of “Reclaiming Our Native Communities” roundtables focused on domestic violence prevention of missing or murdered American Indian and Alaska Native women, children, and men.  The Bureau of Indian Affairs Office of Justice Services (BIA-OJS) is equipping officers to handle long-standing cold cases and child abduction investigations, including positioning Special Agents on cold‑case task forces in strategic locations throughout the country.  BIA-OJS has partnered with the National Missing and Unidentified Persons System to aid in identifying missing persons cases involving Native Americans.

Additionally, the Department of Health and Human Services (HHS) has made the health and safety of American Indian and Alaska Native communities a priority.  HHS is developing a comprehensive, whole-person approach for strengthening these vulnerable populations through prevention, health, and education activities.  The Administration for Children and Families (ACF) partners with tribes and tribal organizations to strengthen responses to Native American victims of domestic violence.  ACF will soon disburse $22 million to increase the public health response and expand shelter and supportive services to victims of family violence, domestic violence, and dating abuse in tribal communities.

To help bolster these efforts to address this terrible crisis, last November, I was proud to sign an Executive Order establishing Operation Lady Justice.  This interagency task force is developing an aggressive government-wide strategy for ending the cycle of violence and providing grants to improve public safety in American Indian and Alaska Native communities.  The task force is consulting with tribal leaders to develop and strengthen investigative protocols to resolve new and unsolved cases, improve information and data sharing, establish best practices for communicating with families throughout an investigation, and raise public awareness through outreach to affected communities.

Tragically, violence is prevalent in tribal communities, but we are determined to reverse this unacceptable trend.  Through partnerships across Federal, State, and tribal governments, we are aggressively working to ensure that members of tribal communities can live lives free from fear of violence.  We will not waver in our mission to bring healing, justice, hope, and restoration to our American Indian and Alaska Native communities.

IN WITNESS WHEREOF, I have hereunto set my hand this
fifth day of May, in the year of our Lord two thousand twenty, and of the Independence of the United States of America the two hundred and forty-fourth.

And as shared from the U.S. Department of Justice:

“American Indian and Alaska Native people have suffered injustices for hundreds of years, including today’s rampant domestic and sexual violence carried out primarily against women and girls.  Today, President Trump has proclaimed a day to remember all those missing and lost to this unacceptable violence.  Through the Presidential Task Force – co-chaired by Katie Sullivan, who heads our Office of Justice Programs – and in partnership with Tribal Nations, we are all committed to ending this cycle of violence.  To that end, we have brought unprecedented resources to support public safety and victim services, including $270 million in grant funding in fiscal year 2019.  The department is also hiring 11 coordinators to consult with tribes and develop common protocols to address this scourge of violence.  From this day forward, today’s proclamation marks a time for all of us to honor Native Americans who have been lost and rededicate ourselves to what President Trump has called ‘our mission to bring healing, justice, hope, and restoration’ to American Indian and Alaska Native communities.”