The social media post simply read, “Help.” But it would transform a report of two runaway teens into a trafficking case requiring an AMBER Alert and intense search for the 14-year-olds.

The case unfolded on June 29, 2022, when the teens left their homes in McGregor, Texas – 20 minutes southwest of Waco, in McLennan County.

According to the girls’ families, the duo are best friends, so their parents initially thought they were staying at either of the girl’s homes. The teens later called their parents to say one of their uncles would be picking them up – but that did not happen. Then, later that night, one of the girl’s mothers was startled to find a note from her daughter stating she would “make this right.”

“I want her to know that everything is OK,” the mother told a reporter while her daughter was missing. “It doesn’t matter what she has done. I want her to just come home. We love you no matter what. Our door is open. Come home.”

McGregor Police Department Lieutenant Ron McCurry said the situation originally did not meet the criteria for an AMBER Alert. But he became more concerned after the girls were gone nearly a week.

“We were following all leads and doing everything we could to find them,” he said.

The course of the investigation would change drastically after one of the girl’s mothers shared a screengrab of a Snapchat message from her daughter. It had only one word – “Help” – but it spoke volumes. Lieutenant McCurry concluded the teens’ disappearance posed a credible threat to their safety since they were likely with an unknown, dangerous individual.

McCurry requested an AMBER Alert in the early morning hours of July 4. The Texas Department of Public Safety (TxDPS) issued the alert at 4:13 a.m.

Ben Patterson is the Alert Program Manager for the TxDPS. He oversees AMBER Alerts and other endangered missing alerts for
the country’s second largest state, with 29.1 million residents, 254 counties, and 1,200 incorporated cities within its 268,596 square miles. Due to its size, the Lone Star State has 18 regional AMBER Alert programs coordinated by law enforcement and public safety personnel who work closely with Patterson.

“I always think, what if it was my child or children that were missing,” Patterson said. “Children are much more accepting of adults and may not think about ulterior motives.”

"The girls were kept in some pretty bad places and mistreated. They were very happy to be rescued."

The McLennan County Sheriff’s Office Human Trafficking Unit, the FBI, and volunteer analysts for the National Child Protection Task Force joined in the search. Detectives and task force analysts were able to get information from Apple to help track the general location for one of the victim’s phones. They could also identify individuals trying to call her, including one unknown person from Waco.

McLennan County Sheriff’s Office Human Trafficking Detective Joseph Scaramucci was able to pinpoint a restaurant near where they girls were being held. And though it was dark, he spotted a license plate belonging to that unknown caller from Waco.

At 2:25 a.m. on July 5, the girls were rescued from an apartment in Georgetown, Texas, about 75 miles south of Waco. The 30-year-old man holding the teens, James Robert Vanhouten, was arrested after a brief standoff with McLennan County detectives and Georgetown Police Department officers, and the girls were returned to their families.

McLennan County Sheriff Parnell McNamara told reporters that after the girls ran away from home, they “fell in with some bad people and went from one place to the next. They were kept in some pretty bad places.”

The teens told detectives they were forced to take drugs. One victim had left her phone at home, and though the other’s phone was malfunctioning, she was fortunately able to use it when it connected to the internet. That helped her send the Snapchat SOS.

“They were very happy to be rescued,” McNamara said. 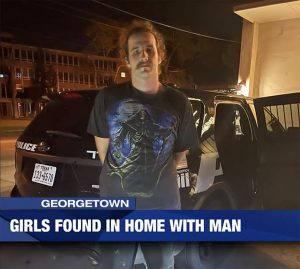 Authorities arrested this 30-year-old man for harboring and trafficking the girls. Photo: KWTX

“We are going to make these scum bags accountable for what they did to these young girls,” McNamara said, noting the girls were taken to five different homes before they were found. “There will be more charges and more arrests to come. We are not going to let up.”

McCurry is thankful for the “absolutely incredible” response received from the public once the AMBER Alert was sent. “It’s a very valuable resource.”

Patterson, too, was relieved to learn the girls were found safe. Since “there are many children who are not recovered, these girls were very fortunate,” he said.

According to reports, more than 50,000 people are trafficked each year in the U.S., and a quarter of those victims pass through Texas. The National Human Trafficking Hotline has registered more than 5,800 trafficking cases since 2007 and more than 800 cases in 2019. Investigators say the suspects in this case were not part of a larger trafficking ring but just took advantage of the situation.

Texas is the birthplace of the AMBER Alert, the tool now used worldwide to alert the public about child abductions. The alert was created shortly after Amber Hagerman was kidnapped and murdered on January 15, 1996, in Arlington, Texas.

Patterson said Texas offers missing person alert training in 30 locations twice a year. He said this case offers a valuable lesson on how missing and abducted children’s cases can evolve. “Be prepared,” he said. “What could be seen as a routine situation can easily change.”

It’s also evident “that we need to take missing kids seriously,” Scaramucci added. “The AMBER Alert put everyone on edge,” helping people take the situation “more seriously than [believing the girls to be] just a couple of runaways.”