The tragic connection between missing and abducted children and child sex trafficking was spotlighted at the 2019 National AMBER Alert Symposium held April 16–18 at the Wa-Ke-Po Resort & Conference Center near Scottsdale, Arizona. The theme for the symposium was “Child Sex Trafficking Along the Northern and Southern United States Border Regions.”

Matt Dummermuth, the former National AMBER Alert Coordinator for DOJ, said during the keynote address that his experience prosecuting child sex crimes makes him appreciate the value of the AMBER Alert program.

“Your work is really a matter of life and death,” said Dummermuth. “Our top priority should be to ensure there are no victims in the first place, and the AMBER Alert will be central to accomplishing this mission.”

The second edition of the AMBER Alert Best Practices Guide was released at the symposium.  AATTAP brought together experts from across the country, including representatives from the National Center for Missing and Exploited Children (NCMEC), to develop an expanded and enhanced guide. It now provides examples of ‘what works’ for all professional and families involved with AMBER Alerts.

The guide is just one example of how AATTAP is applying part of the $104 million in funding provided by the DOJ for its child protection initiatives.

AATTAP also continues to support and expand its no-fee, on-demand eLearning and customizable classroom courses. “People in classes have solved cases as a direct result of participating in them,” said Jim Walters, AATTAP Program Administrator.

Participants learned about tactics being used to lure, abduct, groom and exploit child sex trafficking victims and the need for an effective multidisciplinary response. Presentations and discussions around the scope, scale and nature of the problem in the U.S are highlighted in these 2018 statistics:

Participants indicated a need to ensure victims of trafficking, exploitation or who run away after being lured by a predator are included in the AMBER Alert process.

Elizabeth Strange, First Assistant U.S. Attorney in Arizona, said her state was a good choice for the symposium because Arizona borders Mexico and four states and is home to 23 federally recognized tribes. Her office works with tribal leaders to develop the best prevention and emergency response plans for each community.

Strange said she is seeing more victim-recovery success stories, including a 24-year-old Navajo woman who was taken from her family when she was nine months old. A nurse in Connecticut helped solve the case by using DNA to confirm her identity.

Harlan Cleveland, Emergency Management Director for the Navajo Division of Public Safety, spoke about creating his tribe’s AMBER Alert program. “We like our system.It works very well for us,” he said. “For example, we were recently able to recover an endangered child on the same day the child was reported missing.”

Significant progress is also being made in Indian Country with the following initiatives:

More than 1,600 tribal officials and community members have been trained since DOJ initiated AMBER Alert in Indian Country in 2007.

Our partnership with tribes underscores one of the enduring challenges to the AMBER Alert network – that child abductors and child predators generally do not observe jurisdictional boundaries. Those challenges become even more imposing when the boundaries in question are our international borders.

The Southern Border Initiative (SBI) was created by DOJ in 2006 to extend the AMBER Alert Program into Mexico. So far, more than 700 state, local and federal child protection officials in the U.S. and Mexico have participated in joint training exercises, and have attended six regional meetings and a tri-national AMBER Alert conference.

AATTAP Program Administrator Jim Walters said Mexico is an important partner due to the high propensity for both U.S. and Mexican children to be abducted and/or trafficked across the border. “At the end of the day, it’s about developing relationships,” he said. “It’s about having resources at the ready when abductors and their victims cross border lines.”

The symposium provided AMBER Alert partners with an opportunity to share prominent challenges they face, including:

Even though participants were away from their offices during the symposium, Walters noted it didn’t stop them from actively working on cases. During the three-day symposium, at least five cases were handled, with four children safely recovered.

“It’s a reminder that our AMBER Alert Coordinators are on call every day, no matter where they are or what they are doing,” said Walters. “It was amazing to watch.”

Pattie Bastian shared her nearly 32-year journey to bring her daughter’s killer to justice. Her 13-year-old daughter Jennifer took a bike to ride to a park near Tacoma, Washington, on August 4, 1986. Her body and bike were found in the park 28 days later.

“The murder was so shocking, so unusual,” she said. “The community mourned but we couldn’t comprehend anything like that ever could happen again.”

A few years after her daughter’s death, Bastian decided to have a children’s safety fair to help other children and their families. While the fair started small, 10 years later, more than 10,000 people attended at the Tacoma Dome. 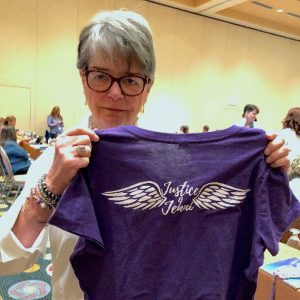 Detectives investigated more than 2,300 tips, but fewer leads came in as time went on. In the spring of 2016, a detective utilized new DNA technology to create a composite of the killer’s physical attributes, including skin complexion, hair and eye color.

On May 10, 2018, Bastian received word the murderer had been found. Robert Dwane Washburn pleaded guilty to the crime and was sentenced to nearly 27 years in prison on January 25, 2019.

Bastian told participants to keep in mind the deep impressions their work and interactions will have on families after a child abduction.

“Your display of humanity and concern will be remembered long after the case is solved, becomes cold, or never ends,” she said. “You are a special brand of humans. I’m proud to be here with you and, on behalf of the families you will contact, and, in whose lives you will make a significant difference, I say thank you.”