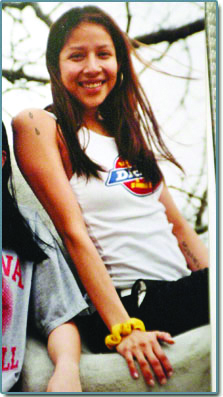 Casey Jo Pipestem was raised in Oklahoma City as a member of the Seminole Tribe. Casey’s grandmother raised her until she passed away when Casey was just 7 years old. She then lived with other relatives, but found it difficult to fit in while living in rural communities.

Casey dropped out of high school, moved back to Oklahoma City and became involved with drugs. Ultimately, she fell victim to exploitation and trafficking at truck stops in Texas and Oklahoma as a way to survive.

Casey’s body was found on January 31, 2004. She had been beaten, raped, strangled and thrown off of a bridge. She was only 19 years old.

Hallmark also interviewed many truckers who remembered having seen Casey, and almost all of them said the same thing, “She was a sweet girl and did not deserve to die.”

The investigation received a big break when “America’s Most Wanted” profiled Casey’s murder, resulting in 84 tips - including one about John Robert Williams, the so called “Big Rig Killer.”

Williams was already serving a life sentence in prison for murder when he agreed to be interviewed by Hallmark. The veteran detective said the vast majority of killers will talk if you do not show any judgment over what they say.

“If you could show Williams a picture he would identify the victim,” said Hallmark. However, Williams did not recognize any of the pictures of Casey.

Hallmark finally asked a family member if there were any pictures of Casey that showed her dressed in clothing she would wear when she was at the truck stops.

“He [Williams] snapped his fingers and said, ‘That is Little Bit. I killed her.’ He named every detail of that case and admitted to strangling her from behind,” said Hallmark. The detective also learned the victim had a ‘Little Bit’ tattoo on her shoulder.

“He is a psychopath,” said Hallmark. “He went and showered and ate while her body was in the truck.”

In 2013, Williams was charged with the murder of Casey Pipestem. He has been implicated in killing 14 additional women and has admitted to murdering 30 others. The man who pimped and exploited Casey was also caught and charged, and is serving time in federal prison. One of other girls exploited by him was just 13 years old.

The U.S. has 2 million truck drivers, and 3 out of 4 are long-haul drivers. It is estimated that 120-140 murders of sexual exploitation and trafficking victims occur each year at truck stops.

“Truck driving is a good job for this type of psychopath-sociopath personalities,” said Hallmark. “You have highly mobile offenders who have to get from point A to point B. They get cash for incidentals and lots of routes and time flexibility.”

Hallmark does credit the trucking industry for helping solve crimes committed by truckers, but emphasized that “Truck stops are a den of rattlesnakes” and trafficking victims are very vulnerable with truckers and in these environments.