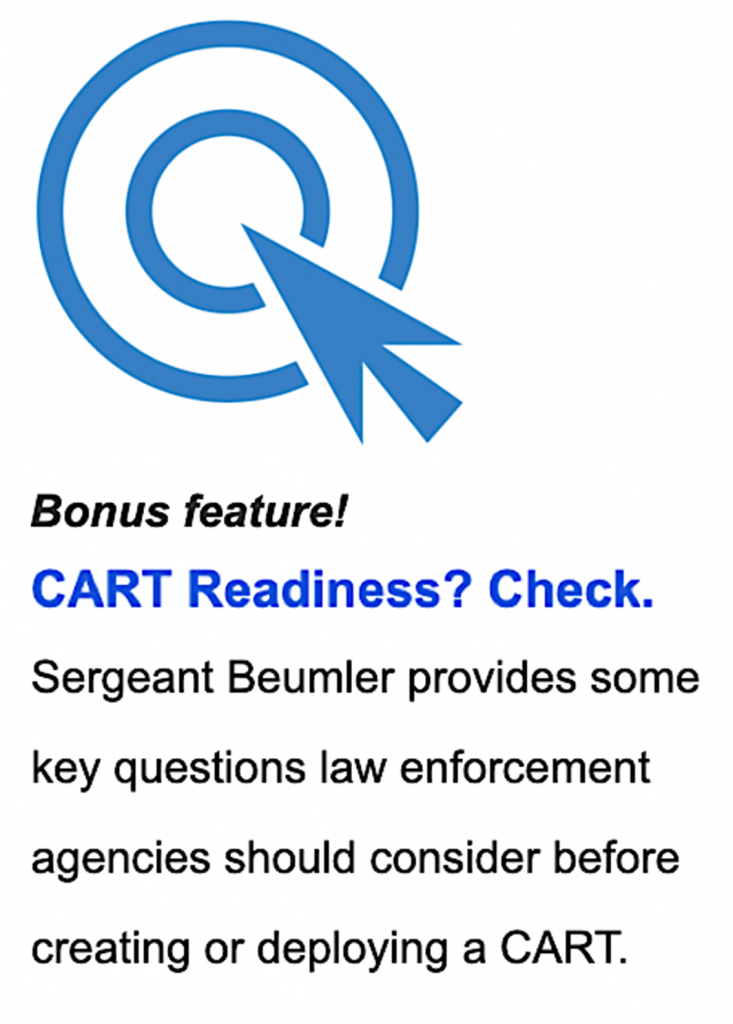 Beumler has served in law enforcement 24 years, half of that time in the GPD’s Criminal Investigation Division as Special Victims Unit Supervisor, specializing in family violence and missing persons. He was a founding member of the Arizona Child Abduction Response Team in 2011, and has since responded to dozens of CART deployments throughout the state. As the state’s CART Coordinator, Beumler has collaborated on CART certification training with the AMBER Alert Training and Technical Assistance Program (AATTAP), the FBI, U.S. Marshals, and the National Center for Missing & Exploited Children (NCMEC).

We spoke with Sergeant Beumler about some of the questions law enforcement asks during training sessions.

What type of person does it take be a successful CART member?

It takes someone willing to put a lot of time and energy into training. They need to be flexible in their schedule for callouts, preparation, and research – and able to get their primary duties done amidst many CART tasks. It takes someone who can keep their cool during the chaos at the onset of a missing at-risk child investigation, including effectively communicating with frantic family members. It takes diligence; someone who doesn’t give up when they hit roadblocks and investigative “dead ends,” as often happens in missing child investigations. And most importantly, it takes someone who isn’t afraid to ask for help during a CART response – and to accept that help, especially from people outside their agency.

How can law enforcement agencies recruit personnel who are a good fit for a CART?

Agencies could face challenges with participation if folks deemed well-suited to the work aren’t able to be recruited as they are identified. Restrictive policies may require that only members of certain squads can be CART members, but sometimes that doesn’t allow for the best talent to be recruited. Also, leadership needs to buy in to the CART concept or the CART will face challenges in pulling people away from other duties.

"Being prepared promotes confidence in those responding and those being served. Scrambling for equipment and resources is not something you want to be doing at the beginning of a deployment. Time is of the essence."

What are the biggest challenges in CART training?

Coordination, cost, and time. Training should ideally be conducted at the agency and regional levels, and occasionally at the state level. A good place to start is to have quarterly training at the agency and/or regional level, and perhaps annually at the state level, depending on the CART’s needs. Training should reinforce the basics, such as neighborhood and roadside canvassing, using leads management software, and setting up and dismantling command posts. Advanced classes in investigative technology are also a plus. And at least annually, the CART should analyze case studies or conduct tabletop exercises. Using local resources and personnel obviously saves money, but so does utilizing quality training provided at no cost by the AATTAP and National Criminal Justice Training Center of Fox Valley Technical College, as well as NCMEC.

How important is preparation?

Knowing what may be needed for a call-out is a challenge until you’ve been through a couple of them. Items needed for a command post can be as simple as a pop-up canopy and folding table, but to operate for any length of time outdoors a canopy, lighting, staging area, and other logistics come into play. That’s why CARTs mobilize trucks and trailers full of equipment. One of the most basic staples is the canvassing form. Until everything goes digital, using printed forms to canvass neighborhoods, or at roadside stops or roadblocks, is a must. But these tend to run short, especially when urban multi-housing/ apartment complexes are involved. Each member should have a personal supply of all needed forms, and command should also have an ample supply (think banker’s box full) to distribute as needed, and to replenish at the end of each deployment. The last thing you want is someone running to the station to make copies of the form at 2 a.m.

How do you sustain effective CARTs?

Sustainability comes down to how well your CART team is recruited, the level of leadership adoption and support, the team’s activity level, membership policy mandates, the quality of available resources, and the extent of training and preparation. The turnover for units within a CART can be high, since members often change assignments, retire, or get promoted; so it takes the dedication of those involved to promote the team, champion its successes, and keep it active. It should be seen as a desirable position to have – rather than an ancillary role of their primary job. Also, agencies
can lose interest in participating in a CART if apathy or a lack of succession planning sets in.

For agencies not sure if they need a CART, what would you tell them?

A CART is a force multiplier – a treasure trove of experience to lean on during an often-tense at-risk missing child investigation. When there is little to no information to go on, and your folks are tired and depleted – but calls for service are still coming in – having CART resources and investigative knowledge is invaluable. There’s a misconception that CARTs take over an investigation; they don’t. While some law enforcement teams may have to swallow a bit of pride to ask for help, with agency leadership commitment and support, that is less of an ask when specialized assistance is needed, especially in the wee hours of the morning.

What’s inside ‘the Blue Ox’?

The Glendale (Arizona) Police Department’s 600 square-foot climate-controlled CART logistics support truck and mobile command center is dubbed “the Blue Ox” because “after the large tractor trailer was painted blue, it reminded people of Paul Bunyan’s giant blue ox,” says Sergeant/CART Leader Patrick Beumler. The $1.3 million crime- fighter-on-wheels was funded with $900,000 from the Urban Areas Security Initiative and $400,000 from the City of Glendale. “It’s been a tremendous help to us,” Beumler adds. Here’s what it features: