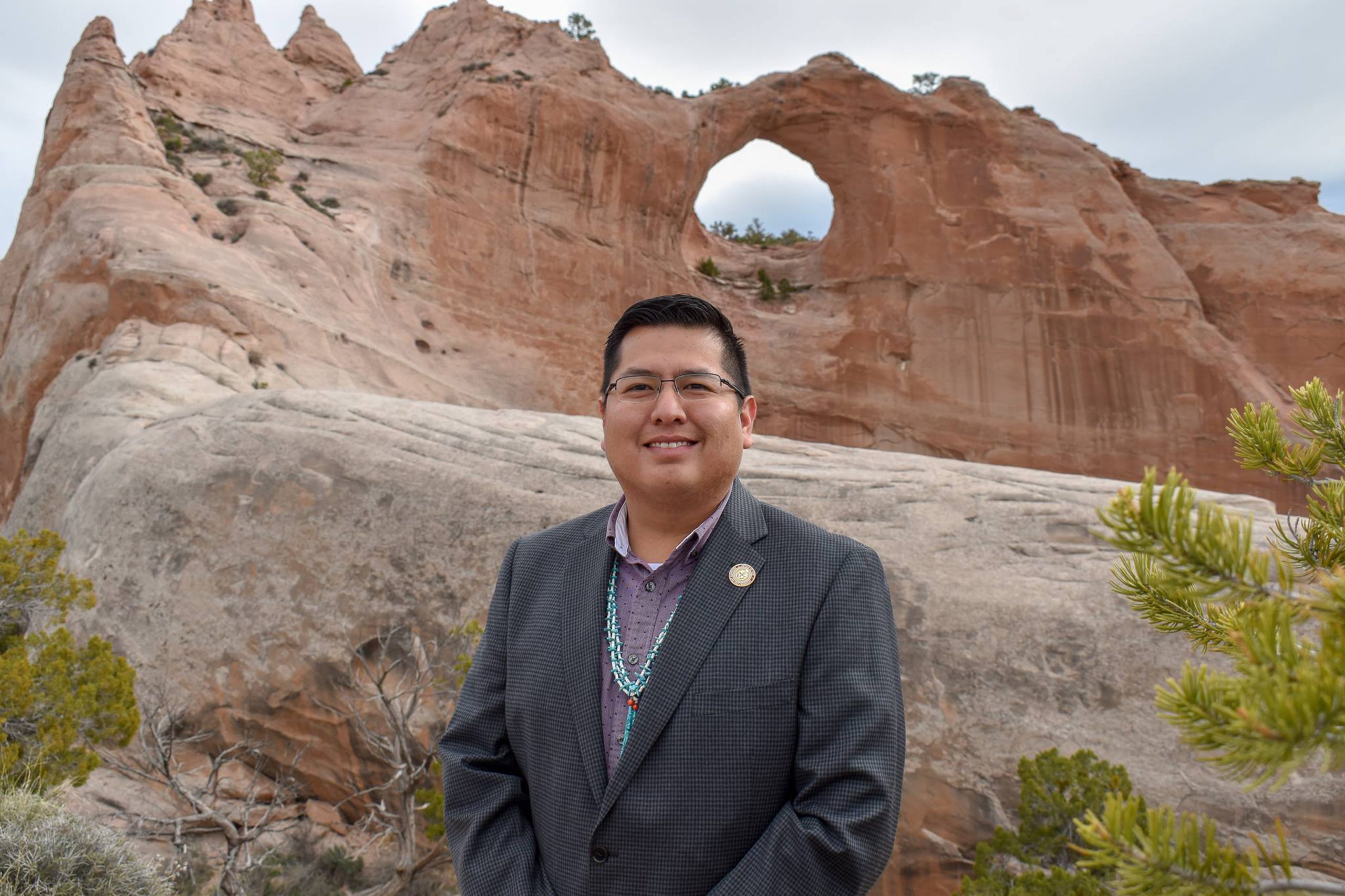 Navajo Nation member Christopher Becenti at Window Rock Park’s “Ear of the
Wind” sandstone formation in Arizona. As Executive Director of the Navajo Nation Telecommunications
Regulatory
Commission
(NNTRC), Becenti is making meaningful strides in bolstering
the Navajo’s technological
infrastructure, which is vital for public safety. Less than half of all homes on the
reservation had fixed Internet service as of 2020, according to the American Indian Policy Institute, “but that’s rapidly changing,” Becenti said.
Credit: Navajo Nation

With the Navajo Nation’s COVID-19 emergency response in high gear, tech leader Christopher Becenti is closing ‘the digital divide’ to make life safer in his community

May 2, 2016, was supposed to be a happy occasion for Christopher Becenti; it would mark his 30th birthday. “But it was one of the worst days I can remember,” he said. “All I could do was sit on the sidelines and watch” as confusion and grief shook the Navajo Nation to its core.

On that fateful day, 11-year-old Ashlynne Mike was abducted by a stranger near her home in Shiprock, New Mexico. Her family’s frantic outreach efforts to find her were fraught with jurisdictional misunderstandings and slow communication responses that delayed the issuance of an AMBER Alert by 12 hours. By then it was too late. Ashlynne had been brutally murdered.

The Navajo Nation vowed never to allow a similar situation to happen again. And Becenti, a tech-savvy member of the Navajo Nation who then worked in the private sector, knew “something had to be done,” he said. “I knew one day I wanted to help my people get better connected.”

In April 2018, the Ashlynne Mike AMBER Alert in Indian Country Act was enacted, providing the country’s 574 federally recognized tribes with funding and opportunities for more technology, training, and pathways to stronger partnerships with state, regional, and federal authorities.

Within a year of the law’s passage, Becenti was tapped by Navajo Nation President Jonathan Nez to be the Executive Director of the Navajo Nation Telecommunications Regulatory Commission (NNTRC). His task: untangle a web of problems posed by local and national wireless carriers and mobile device manufacturers to ensure Wireless Emergency Alerts (WEAs) could be sent to everyone eligible to receive them.

He also needed to “creatively strategize how to expand broadband access to our most remote territories,” since he had few resources at the time.

A year into his position, however, the Navajo Nation would face down a devastating public health crisis: the COVID-19 pandemic. Pre-pandemic, the Navajo Nation had been at the forefront of strengthening public safety infrastructure to bolster its emergency/crisis response capabilities, including AMBER Alerts. “The pandemic, however, accelerated everything we were working on,” Becenti said.

Though his mission is clear-cut, the work is not. But major advancements are occurring thanks to his tireless efforts, Navajo Nation leadership support, and COVID-19 financial relief from the U.S. government.

The Navajo Nation is the country’s largest Indian reservation, encompassing three states (Arizona, New Mexico, and Utah) and 27,000 square miles (about the size of West Virginia). But only a small percentage of its 173,000 citizens have access to broadband for reasons ranging from their homes being in remote locations to prohibitive costs. And 911 emergency services are problematic. When a Navajo Nation citizen uses a mobile phone or even a land line to call 911, the call is rerouted up to two times in order to reach the nearest law enforcement agency (LEA) communications center. Many Navajos who live in rural areas do not have standard addresses, and must rely upon P.O. boxes. In addition to the delay and potential dropped calls that rerouting causes, the lack of a street address can impede or altogether prevent the ability of the LEA to pinpoint the caller’s location.

These problems became painfully clear during the pandemic, when Navajo citizens could not immediately connect with emergency services. Reportedly, some citizens died trying to reach a payphone, or a neighboring home with telephone access (which might be 20 miles away) or while attempting to get to a place with a stronger cellular signal.

Additionally, people in remote areas could not receive COVID-19 WEAs or connect to online sources of news, specifically the Facebook page of Navajo Nation President Nez. “Many use computers at community centers, which shut down along with most public spaces,” Becenti said. “On top of that, people could not work from home or have their children learn remotely.”

The situation was bleak, and a lot to tackle, but with lives at stake, Becenti set his sights on fixing WEAs, since many Navajos reported being unable to receive them on their cell phones.

After numerous conversations with the Federal Emergency Management Agency (FEMA) and the Federal Communications Commission (FCC), Becenti began to see the big picture. And the source of the problems.

Becenti began working directly with a host of carriers to resolve technical issues while also enticing major carriers such as AT&T and T-Mobile to invest in providing coverage to the Navajo Nation. And while he was able to rectify issues with Android phones that prevented some users from getting WEAs, one smartphone maker was a holdout: Apple. WEAs were inaccessible to phones sold by smaller companies who were unable to order units in the large numbers Apple required for the phones to be fully provisioned to accept WEAs. Becenti and smaller carriers that serve the Navajo Nation made numerous attempts to discuss the situation with Apple, but repeated calls and emails got them nowhere.

Fortuitously, when the FCC invited the public to submit comments about WEA concerns in early 2021, Becenti recognized the Navajo Nation needed to respond immediately. It would be their best chance at getting Apple to pay attention and resolve the situation.

On April 20, 2021, the NNTRC and Navajo Nation Office of the President and Vice President (OPVP) formally submitted comments to the FCC with the assistance of Washington D.C. area attorney James E. Dunstan of the Mobius Legal Group.

“Thankfully, our concerns were heard loud and clear,” Becenti said.

Within eight months, Apple announced all iPhone users who upgraded their software to iOS15 would have access to WEAs.

Despite feeling like David taking on Goliath, Becenti was amazed by the win. So was the Navajo Nation leadership. After Apple’s announcement, Navajo Nation President Nez said, “The safety of our elders and those most vulnerable is important as we keep our Navajo families informed of any emergency. We can now immediately alert the Navajo people should one of our family members go missing or there exists a public safety threat.”

“Now we have about 99% penetration of WEAs on our wireless devices,” Becenti said. “We just need everyone to update their iPhones to get to 100%.”

To mitigate COVID-19’s devastating impact on the U.S. economy, the American Rescue Plan Act (ARPA) was signed into law (Pub L. No. 117-2) on March 11, 2021. It built upon many of the measures of the Coronavirus Aid, Relief and Economic Security (CARES) Act of 2020 by ensuring affordability and access to broadband infrastructure for federally recognized Indian tribes/indigenous communities and other rural regions. Additional help followed with the Infrastructure Investment and Jobs Act (H.R. 3684), signed into law November 15, 2021.

Funding for the construction of new broadband connections across the Navajo Nation primarily stems from Legislation No. 0257-21, which provides more than $1.16 billion in ARPA funding.

In November 2021, the National Telecommunications and Information Administration (NTIA) began accepting applications from tribes for the Tribal Broadband Connectivity Program, which provides $980 million through the Consolidated Appropriations Act of 2021. (NTIA limits funding  applications to $55 million per tribe.) And by December 1, 2021, the 24th Navajo Nation Council met to discuss allocation of the myriad ARPA funds and grant applications for broadband internet expansion and public safety. 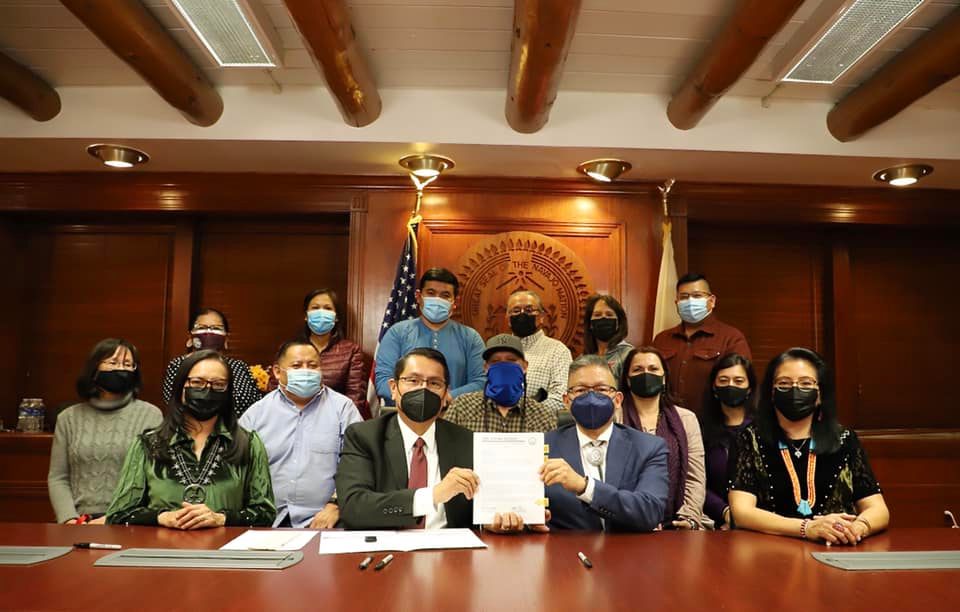 “Through the American Rescue Plan Act, our administration has a proposal before the Navajo Nation Council to allocate $208 million for broadband projects,” said Navajo Nation President Nez. “The Navajo Nation Telecommunications Regulatory Commission Office continues to look at many ways of leveraging many sources of funding to expand broadband for homes, first responders, schools, businesses, and others.”

Navajo Nation Vice President Myron Lizer added, “We are very optimistic that these collective efforts will lead to many new towers, fiber lines, and high-quality internet for our Navajo people and communities.”

As millions of dollars in funding awaits approval and allocation, Becenti is working with Navajo Nation leadership to achieve a number of goals, including: creating a single network, FirstNet, to be dedicated for first responders; gradually consolidating the Navajo Nation’s seven emergency dispatch call centers into a single facility that has full 911 routing capabilities; completing the Nation’s rural addressing initiative, which will allow 911 dispatchers to see the caller’s location and develop a database for record-keeping; and partner “in more creative ways” with the Navajo Tribal Authority, the Nation’s utility company.

Beyond the technical achievements, Becenti is most deeply motivated by knowing WEAs are reaching the Navajo Nation and saving lives, while he works to “close the digital divide.”

Six children have been recovered following two separate AMBER Alerts thanks to WEAs that would not have been as widespread as they are now. “Knowing the public can now receive such alerts is an amazing feeling,” Becenti said. “Every minute counts when there’s an active AMBER Alert. We all have to be connected.”