Awards presented in the US Department of Justice Great Hall

Missing Children’s Day is recognized annually in Washington D.C., as well as states across the nation and countries around the globe. The U.S. Department of Justice held its 2018 awards ceremony on May 23, 2018, in the Great Hall, with event coordination by the Office of Justice Programs, Office of Juvenile Justice and Delinquency Prevention.

“The exceptional individuals we recognize remind us of our responsibility to be vigilant about the safety of our children and to hold accountable those who seek to harm them,” said Panuccio.” Because of their diligence, courageousness, selflessness and commitment to protect the most vulnerable among us, children all over the country are safer in their communities.”

President Ronald Reagan proclaimed the first National Missing Children’s Day in 1985 to honor the memories of children still missing. Panuccio spoke about the importance of the AMBER Alert program in helping to find those children. “The AMBER Alert is a centerpiece of our child protection efforts and one of the most valuable public safety tools we have at our disposal.”

This award was given to Montgomery County, Maryland, Police Department Detective John Witherspoon who worked tirelessly to investigate a case involving a 15-year-old female runaway that began in December 2016.

“He scoured Montgomery County and traveled to northern Virginia every day for eight weeks to search locations where the girl had been seen,” said Panuccio. “Sadly, in mid-February of last year, her remains were found and her death was ruled a homicide.”

Witherspoon continued to work with police officers at another agency to identify and arrest ten gang members for their roles in the murder. He relocated the victim’s mother after she received death threats from gang members. Witherspoon also investigated 166 missing children cases in 2017 in which he located every child.

This award was given to Colin Blevin, a Santa Clara, California, resident who responded to an AMBER Alert, helping police recover an abducted infant and capture the kidnapper.

On July 17, 2017, Blevin noticed a stolen car blocking the entrance to the construction site where he worked, also observing a baby inside the car. “I took the baby and I put him on my trailer, and I said, ‘I’m calling 911’,” Blevin told reporters. “The guy didn’t really seem to care. I think he realized he messed up. He was in for a stolen car and he stole a baby.”

The suspect then tried to steal another car to get away. “Blevin prevented the suspect from escaping with a one-year-old child in a stolen car and protected the baby until police arrived,” said Panuccio.

The offender was sentenced to more than five years in prison for felony child abuse and vehicle theft.

This award was given to the Maryland Internet Crimes Against Children (ICAC) Task Force for investigating a sexual predator who had been victimizing children since the 1970s. The ICAC Task Force received a tip from a man who said he had been abused by the suspect in the 1990s.

“They searched the suspect’s home, and during an interview, they learned he was still having sexual relationships with boys he met on Craigslist,” said Panuccio. “He admitted to engaging in sexual acts and producing child pornography throughout his adult life.”

This award was given to Charles County, Maryland, Sheriff’s Office Detective George Higgs for investigating a case of a 16-year-old student athlete who was receiving sexually suggestive text messages from a school coach.

“A police lab analysis of the devices turned up videos of the suspect physically and sexually assaulting several children,” said Panuccio. “Based on screen captures, Detective Higgs determined the videos were produced in school buildings and in the suspect’s home.”

Detective Higgs was able to identify 42 victims between the ages of 13 and 17. The suspect, who was also confirmed to be HIV positive, was sentenced to 105 years in federal prison after being found guilty of 219 charges involving sexually abusing children and child pornography.

More than 2,000 students from 37 states participated in the 2018 National Missing Children’s Day poster contest sponsored by OJJDP. The top honor was awarded to Eden Hoffman, a fifth-grader from Huron Elementary School in Clinton Township, Michigan.

“This poster symbolizes a family that has found their missing child,” said Panuccio. “The heart behind them shows the bonds between the family. The colors on the words express hope, joy, and love.”

Hoffman was honored with a plaque, a certificate of recognition and a trip to Washington, D.C., with her teacher Ameilia Vecchio.

Despite his pain and heartache after his daughter was murdered, Russell Barnes is now giving back to other families through his work with the National Center for Missing and Exploited Children and its Team HOPE. His address at the 2018 National Missing Children’s Day ceremony both encouraged and challenged law enforcement to be vigilant and never give up working to respond effectively to incidents of missing and abducted children.

Barne’s 16-year-old daughter Phylicia vanished while visiting her half-sister in Baltimore over the Christmas holidays in 2010. Her body was found in the Susquehanna River four months later. An ex-boyfriend of the victim’s half-sister was arrested in her murder but he was acquitted after three different trials.

“I stand before you today to convey this message–our vulnerable children are being targeted and snatched in front of our eyes,” said Barnes. “When that happens, we as parents, as their protectors, need the criminal justice system to do more to help us find them and bring their abductors to justice.”

“My message to law enforcement--train your first responders to treat a missing child as if it was their child or a family member. Every second, every minute, every hour, every day, counts.”

Barnes has dedicated his life to helping other families of missing and abducted children. He and his family founded the Phylicia Simone Barnes Foundation, which led the legislative effort to raise the age in Maryland from 14 to 17 for children who should be considered critically missing.

“Phylicia was my baby, and I knew she was going to be great,” said Barnes. “I would look at her as a father and be amazed at her character. Her happiness, her silliness and just her book smarts. Purple was her favorite color. Her path in life, I felt, was going to be awesome. She was graduating with honors and had already been accepted to a major university at 16.”

In closing, Barnes recognized the importance of the ongoing effort to protect children and support families. “This senseless murder has been devastating to everyone in our family. Our world has changed forever. I know how other parents feel when searching for their missing children, and no one is listening. In 20 years, we will be remembered for change, or we will not be remembered at all. Justice for Phylicia.”

More information about NCMEC’s Team HOPE can be found at

Additional details about the Phylicia Barnes Foundation can be found at 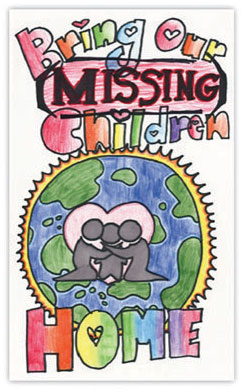